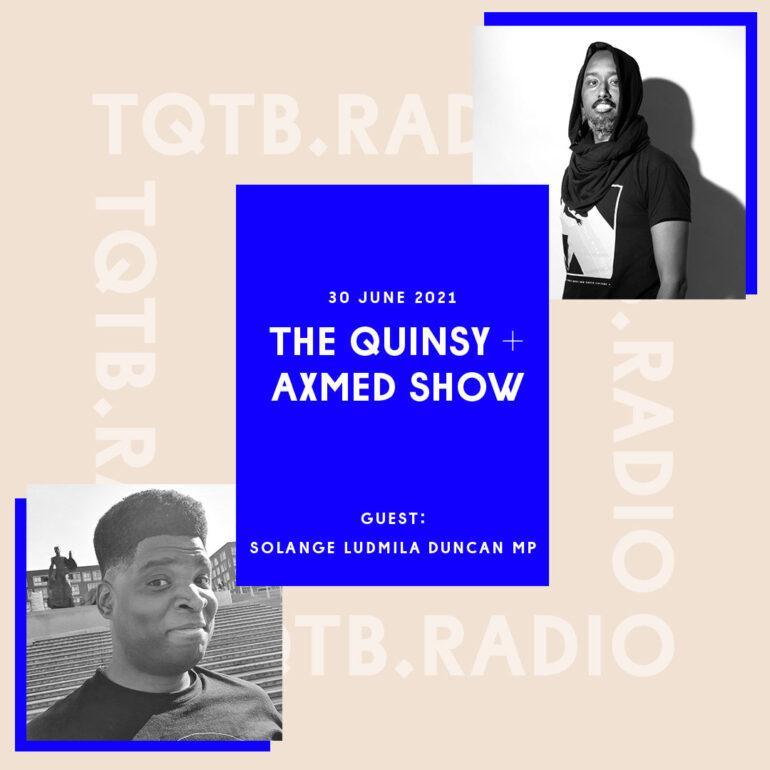 Ahead of Keti Koti, a day that commemorates the emancipation of enslaved people in Suriname, Quinsy and Axmed speak with Solange Ludmila Duncan, a Member of Parliament for Sint Maarten.

Our hosts talk with Ludmila about the importance of 1 July as a day of commemoration, decolonisation and the ways in which the Kingdom of the Netherlands relates to the repercussions of slavery and colonisation.

Plus Quinsy and Axmed get into their own mix of Q and As.

Expect Quotidian and Analog news, as well as Asterisks (things that make you go ‘Hmmm?’) and Qualifieds (things that get the Quinsy + Axmed seal of approval).

A transcript for this podcast will be available soon.

NOT ON SPOTIFY? WE GOT YOU….

We’re on a bunch of other platforms too.

Solange Ludmila Duncan is a Member of Parliament in St. Maarten. Before politics, she worked as a senior policy advisor for the Ministry of Telecommunications, Economic Affairs and Tourism. She’s lived in the US and the Netherlands before returning to St.Maarten where she has been an advocate for community development and youth mentorship. As an MP, her work focuses on reforms and innovations in education, cultural heritage, entrepreneurship, sustainable urban development and environmental protection. She holds a Master of Science in Development Management from the University of Birmingham.

In October 2020, she proposed the establishment of a permanent Committee for Constitutional Affairs and Decolonisation in Parliament as a response to the current constitutional crisis within the Kingdom of the Netherlands. She contends that the current decolonisation movement will strengthen the identity of people in the Dutch Caribbean and fuel what she believes are long-overdue dialogues and debates on the relationship between the Netherlands and its former colonies, as well as redefine what it means to be a citizen within the Kingdom.

Ludmila’s song choices on this episode were Common ‘The People’ and Deya Dova ‘Myth of the Cave’.

Quinsy Gario is a visual and performance artist from Curaçao and St. Maarten. He focuses on decolonial remembering and the denormalisation of inherited colonial practices. His most well-known work, Zwarte Piet Is Racisme (2011–2012), helped normalise the collective struggle against the racist Dutch figure and practice of Zwarte Piet (Black Pete). He has an academic background in Media, Gender and Postcolonial Studies from Utrecht University, is a graduate of the Master Artistic Research program at the Royal Academy of Art, The Hague and was a recurring participant of the Black Europe Body Politics conference series.

Axmed Maxamed is a Queer Diasporic Somali activist, organiser and music nerd. Born in Xamar, Somalia, Axmed spent his early years here until his family had to flee during the civil war and ended up in the Netherlands. He spent his formative years in Breda in the
south of the Netherlands until he moved to Amsterdam. In Amsterdam, Axmed co-founded Dance with Pride, a queer initiative which aims to re-unify dance music with its queer roots. He raises money for and awareness around grass roots queer initiatives, with the fundraiser parties and sales of the Dance with Pride T-shirts. He co-curated the music compilation ‘Place: The Netherlands’ which raises funds for and awareness around LGBTQIA+ refugees in the Netherlands.

Axmed also co-organises the first Somali LGBTQIA+ gatherings in the Netherlands. He is involved in other queer initiatives that focus on QTBPOC. Together with Ladan Maandeeq, Axmed started work on ‘Queer Somali Pasts and Presents: A Storytelling and Archival Research’ which will focus on the lives of Queer Somalis in the diaspora and Somalia in the present day and the past. Axmed addresses systemic inequalities in Dutch society and in the underground dance music scene which pave the way for harmful practices such as cultural
appropriation and the white washing of Black music.

Disclaimer: All TQTB productions maintain social distancing measures to keep our guests and team as safe as possible.