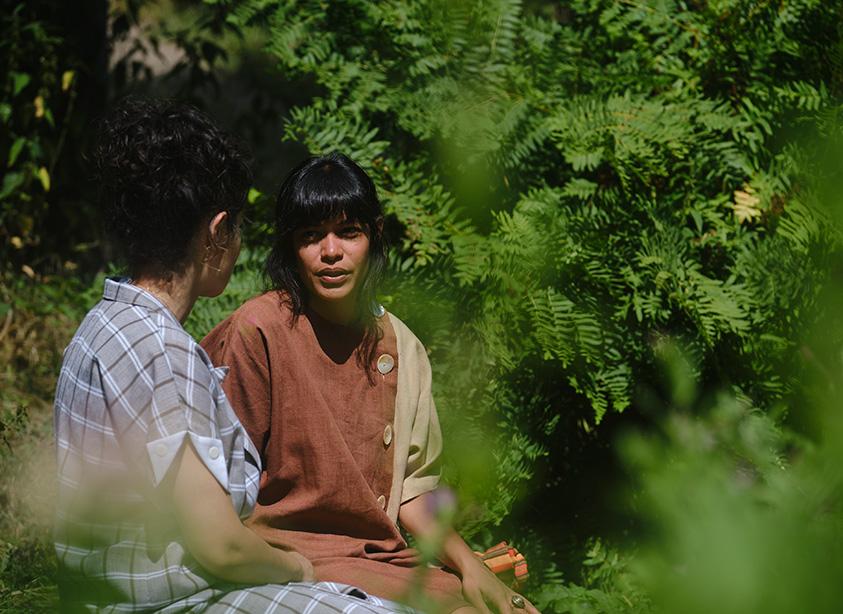 In episode 002 of the Inspired Flight podcast, we speak with Sallisa Rosa (she/her), a mixed Indigenous Artist and Seed Awardee from Goiania-Goiás on central Brazil based in Rio de Janeiro.

Through her practice, including photography, video, installations and participatory work, she draws attention to Brazil’s indigenous communities, which have been overlooked by the mainstream.

Sallisa speaks to us at contemporary art festival Unfair22 about her creative journey and representation in the art scene.

LISTEN TO SALLISA’S INTERVIEW ON SPOTIFY

The Seed Awards, an initiative by the Prince Claus Fund, are designed to address the specific needs of emerging creatives in the early stages of their careers by giving cultural practitioners €5,000 to invest in their artistic practice and give visibility to their work.

It’s here that we met Sallisa.

Sallisa Rosa (she/her) is a mixed-race, indigenous Artist from Goiania-Goiás in central Brazil, currently based in Rio de Janeiro. Through her practice, including photography, video, installations and participatory work, she draws attention to Brazil’s indigenous communities, which have been overlooked by the mainstream.

Though she originally studied communications, when an opportunity to get into arts presented itself she took it and never looked back.

“I went to a museum and was asked to provide a piece for an exhibition. So, I made an installation. I didn’t have enough technical experience but I had the courage [laughs] to do things.”

In her work Sallisa explores themes such as territory, nature, fiction, identity and family, which is of particular importance to her.

“I started this work thinking about my family, our process, identity and path.”

She sees art as a way to express herself in many different ways.

“For me, art is a way to express myself, my identity and problems. I studied communications but I didn’t feel too comfortable in that field. In the arts I have many opportunities to communicate through things which are both visible  and invisible.”

The desire to represent her community is another big driver.

She uses her work to highlight a contemporary image of the indigenous people, not a stereotypical or a stigmatised one.

At Unfair 22 Sallisa presented the series ‘Made Knives’ celebrating knives and machetes as symbols of resistance.

She also presented a series of watercolour drawings called ‘The Path’ inspired by research into ancient paths used by indigenous people in Brazil, ‘mysterious’ paths made by insects and those carved by rivers.

Audience also had a chance to see her pottery collection named Abya Yala which has a very personal meaning:

“I started the series together with my grandmother who has Alzheimer’s. I think a lot about memory with regards to my family because we made a lot of effort to recover our indigenous memory. My grandma is the oldest person in our family and she lost hers.

“[With this collection] I programmed our memories in a ritualistic and spiritual way, by placing them inside the earth.”

Sallisa feels that artists from her community were overlooked:

Also, her indigenous artistic expression was not always recognised.

“There is a lot of prejudice regarding our art. For example, the pottery I made is seen as a naive or utilitary art by some contemporary artists who say this is not art.”

An opportunity to exhibit in front of an international audience therefore meant a lot and made her feel a level of responsibility.

“I am the only indigenous artist from Brazil at this fair, so, my work is like an open invitation to present more of us here. It’s a great opportunity. Though I am not a leader I have a lot of work to do here – open doors, network, share artworks and connect with people. I am super happy to be here.”

Presenting her work at an art fair in Amsterdam also felt significant from a historical perspective.

“This is my first art fair here and my first time in Amsterdam. It is like a historical reparation. For me it is really important to be here because Europe has this kind of history, with stolen lands. This is a chance to reclaim my space and this art space.”

Sallisa wants her work to erase the negative perceptions that hold artists like her back.

“I would like people to understand that indigenous contemporary art is also art. This is a real, living culture. We are alive and we make real culture.”