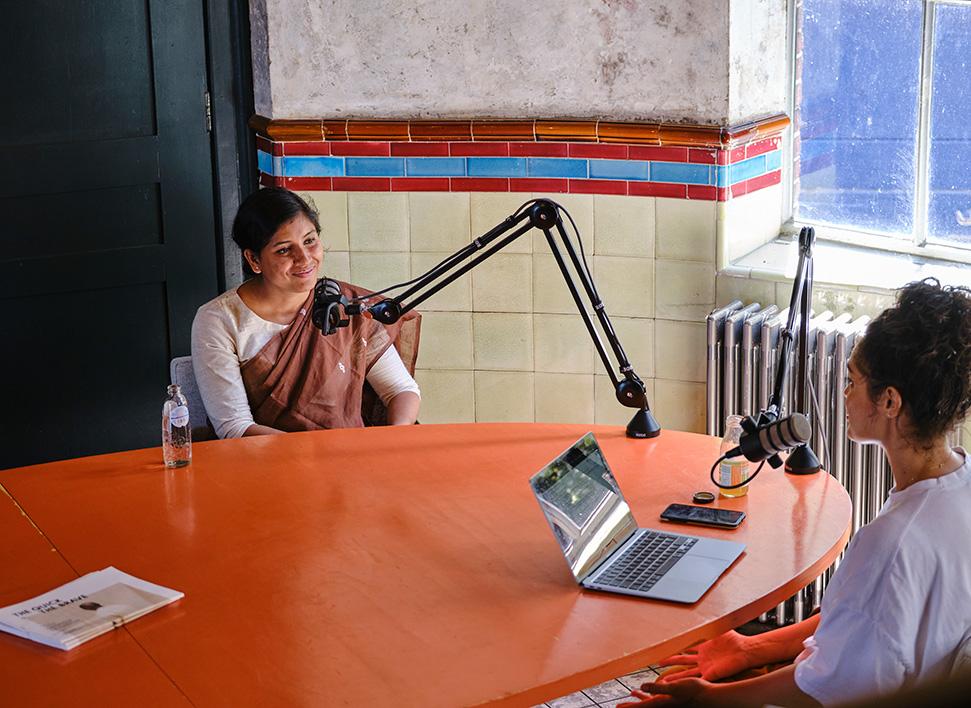 In episode 003 of the Inspired Flight podcast, we speak with Sumi Anjuman (she/her), a Visual Artist, Activist and Seed Awardee from Bangladesh.

A Photography graduate from Pathshala South Asian Media Institute, she is currently pursuing a Masters degree in Photography and Society at the Royal Academy of Arts in The Hague, the Netherlands.

Sumi speaks to us at contemporary art festival Unfair22 about her creative journey and representation in the art scene.

LISTEN TO SUMI’S INTERVIEW ON SPOTIFY

The Seed Awards, an initiative by the Prince Claus Fund, are designed to address the specific needs of emerging creatives in the early stages of their careers by giving cultural practitioners €5,000 to invest in their artistic practice and give visibility to their work.

It’s here that we met Sumi.

Sumi Anjuman (she/her) is a Visual Artist and Activist from Bangladesh. A Photography graduate from Pathshala South Asian Media Institute, she is currently pursuing a Masters degree in Photography and Society at the Royal Academy of Arts at The Hague in the Netherlands.

Sumi’s work draws on her experience as a woman in a conservative society and challenges of the Bangladeshi LGBTQI+ community. Her exhibition ‘Somewhere Else Than  Here’ highlights the psychological impact of the social exclusion this community faces.

Her artistic journey and craft were influenced by the experiences in the environment she was part of as well as the desire to learn and try something new.

“I was always interested in lighting and how it changed through different times. So, I was experimenting and making my own lights. Movies and artists inspired me in creating the language and mood for my photography. That’s how I developed the craft for my art.”

The drive to be an artist also stemmed from her dissatisfaction with the status quo in Bangladeshi society as well as in her own family.

“In my house there was one set of rules for my brother and another for me. He had the flexibility to do anything but, in my case, my family often said no. ‘No, you are a woman so you cannot do that’, ‘you cannot go there, it’s not safe’, ‘you cannot laugh loudly, women should be very quiet’… .”

She first realised the power of photography in 2013, when she spotted a photo by a Bangladeshi Photographer capturing a harrowing scene in the wake of the collapse of the Rana Plaza garment factory.

“It showed a couple hugging each other, buried under the rubble. It was all over the national press. I was intrigued by the image because I realised it was not only about that particular incident. It was talking about the failure of the state, lawlessness and vulnerability of those people.”

Following the tragedy at Rana Plaza, other incidents resonated with her, such as the killing of two gay activists by a radical Islamist group in their own apartment in 2016.

“I noticed that all of my friends from LGBTQI+ community went into hiding. I also saw that the government did not take a strong stance against this although it was not an isolated incident. There  were a couple of killings like that at that time. I was disturbed by that.”

She decided to study photography in 2017 with the aim to use it as a medium to talk about the injustices in society. She felt the urge to break the silence about what was happening and the segregation that her friends from the LGBTQI+ community face.

Her exhibition focuses on the experiences of the LGBTQI+ community in Bangladesh. Through her ongoing series ‘Somewhere Else Than Here’, the aim of her work is to make people switch their focus from the physical to the psychological, in reference to this community.

“Everyone in our country was talking about their sexuality, not about their psychological state. I wanted to develop work that can create a non-violent protest for them and create a bridge between the heterosexual and homosexual community. I shared that idea with my friends and people with whom I work and we started to talk. They unfolded all their experiences from their childhood till now. This work is about what they love, feel, desire and fear.”

In her eyes, too much emphasis on the physical aspects of LGBTQI+ people creates barriers.

“When I started this project I was researching works from different parts of the world. Most of the art, at least to me, was about their sexuality, bodies. They were represented like sexual objects, which is not what I wanted.”

She decided to create her own representation, emphasising the aspects of humanity we all share.

“I wanted to communicate that they are human beings. When you exaggerate [the representation of] these people it creates some kind of exclusion, suggesting they are different from us. But they are not.”

Sumi wishes her work will motivate audiences to understand the importance of integration.

“I always wanted for people to see the LGBTQI+ community as human. It is not only about their gender identity. We are the society.”